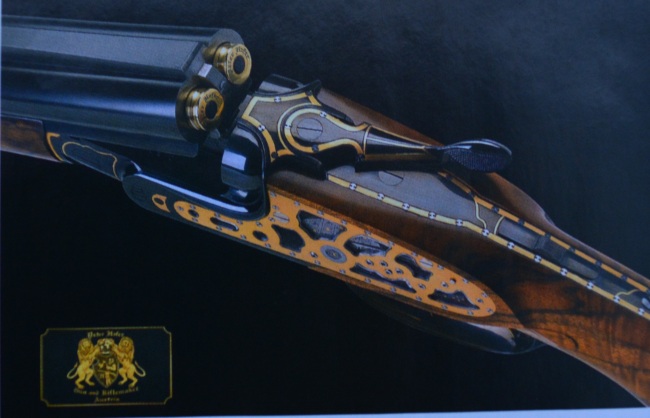 This is a .577 Nitro double rifle by Peter Hofer, a German bespoke gunmaker. I only read about it in a magazine (and that’s where the pic comes from, sorry about the quality). There are two unusual things about this gun, one leaves me cold and the other stirs my interest somehow. The one that I don’t care much about is that the stock is said to be filled with electronic gadgets, including a shot counter and a remote controlled GPS module, which can be used to retrieve either the gun if it is stolen, or the hunter if he gets lost in the African bush.

The one that makes me thinking is… but first I have to make a few statements, which are, I hope, self-evident.

First is that best gun making  is a form of art. Applied art, of course, but still art. Disproportion between the price of a best gun and a mass-produced thing that does the same job is evidence enough.

The second one is that art has to evolve in order to remain art. Much like ‘dead’ metaphor, any artful expression has an effect only as far as it is novel; once a pattern is repeated often enough, it becomes a common thing and loses most of its power. Jury Lotman covered this extensively in his “Structure of Artistic Text” and other books. Evolution doesn’t mean that old paintings, sculptures, etc. lose their value over time – on the contrary, they gain it – it means only that a new master can’t hope to succeed by copying the ways of the old masters. Something new, a deviation from the norm, must be introduced.

As al art, “Best Gun” evolves, too. The first British best guns, from about Joseph Manton, strike one as being uncommonly plain. In terms of decoration, of course – the shape of hammers, the locks, in fact, everything that relates to the function of the gun is flawlessly beautiful.Check out this Joe Manton.

This reserved English style developed to what I call ‘functional engraving’, which serves a purpose of making the gun less prone to blinks as well as adds to the beauty, and reached its peak at about the junction of Victorian and Edwardian reigns. The best gun of the time is probably what Renaissance paintings are for visual art. But, there was the perpetual question which arises each time a goal or a peak is reached.

Once the double gun evolved to its highest point mechanically, the need for artful deviation in design became even more apparent. The main line of development continued to be in the direction of ‘more decoration’. Bolder lines to precious metal inlays, to relief engraving and photographic-quality images of Bulino engraving. Themes other than game scenes – all the way up to nude females – were tried. This, generally, kept gunmakers busy for the last century or so.

But a best gun is an applied art object, and as such it is limited by the function. In simple words, an artful gun must still be shootable and usable for hunting. And an increase in decoration does at some point lead to where the it is no longer advisable to take the gun out of the gunroom. This sets the limit to ‘more decoration’ line of evolution, and once everything within this limit is tried, the same question arises:

When I beheld the image of this Hofer, I felt that here might be the answer.

Glass windows, which served as cocking indicators, were popular at one time. But here the whole sideplate is made of bulletproof glass, leaving the parts of the mechanism, gold-plated as they are, in full view. The purely technical, functional details are here an element of decore. This is highlighted by the ‘hi-tech’ design of other parts of the gun.

The design of this particular gun might not be to everyone’s tastes. I don’t find it too attractive myself, and it’s filed under ‘guns for a gunroom’ in my book. What I’m interested in is the principle. The functional parts of the gun are its decorative parts.

While I was thinking about that, Ian Spencer of Joseph Manton London told me about their plans to build a three-barreled shotgun on the triggerplate action, with sideplates opening on hidden hinges to make the inner pars in full view – with the parts not only polished, but, where possible, engraved.

This, apparently, is not the first attempt to build a gun on a similar principle. As obsessed-with-doubles recently posted on  doublegunshop Beretta is making or about to make a Sparviere model with locks made on plates which open on hinges to offer a full view. 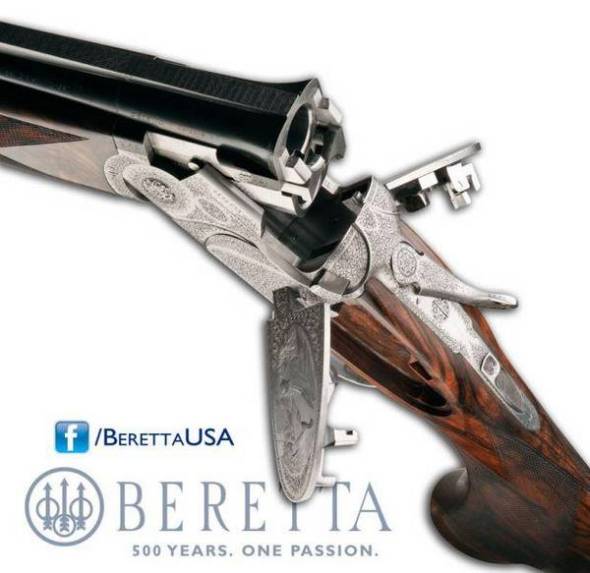 This gun, as Gregg points out, is a development of Flli Bertuzzi design, which looks like a source of inspiration for Joseph Manton London. 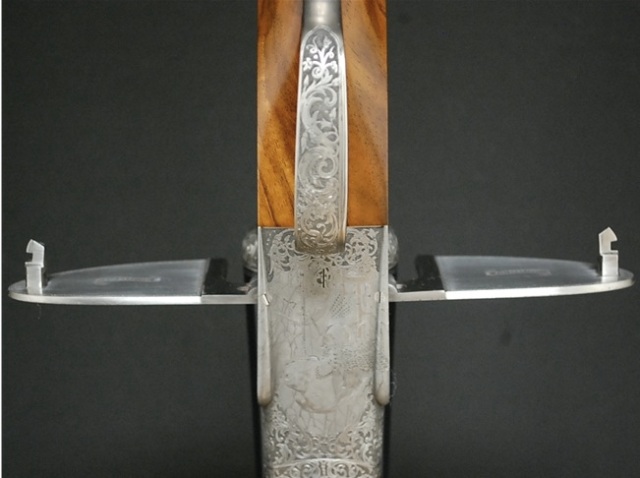 The pics come from Gregg’s post at his dogs-and-doubles blog  and more detail of this design, including a cool video of how it all works, can be found there.

All these guns are united by the same idea: to have the functional details of the gun perform the artful purpose as well. With at least three makers (four if you count Beretta and Flli Bertuzzi separately) pursuing the same direction, it might be called a trend.

A sort of a similar line is taken by Purdey. I mean their experimenting with Damascus. There the substance of which the gun is made is artful – a slightly different direction, but another bit of evidence of the ‘need for new’, the ‘new’ being something different from ‘more decoration’ in best gun making today.

Are we in for a new direction in best gun art?