The topic of this post was to be determined by a poll, but it ended in a tie, so I’ll try to match the expectations of both parties in one go.

The Tulka, or a hammer double gun made by Tula Arms Works, is a quintessential shotgun for generations of Russian hunters. It is known under various model names – TOZ-B, TOZ-BM, TOZ-63, TOZ-66, TOZ-54, TOZ-80 – but the differences between the models are minor, and for all practical purposes it’s the same gun, with Greener’s crossbolt and bar-action locks.

The design dates back to 1903, when the Imperial Tula Arms Works decided to launch mass production of hunting guns, and is associated with Captain (later General) Sergey Zybin, who was sent to major gunmaking centers of Europe for ideas re: what and how to make.

It was, however, far from the only design of hammer guns made in Tula. Until 1903, the factory acted as a bespoke maker, with the fantasy of the customer as the only limit. But even after transition to mass production, hammer guns came in at least three varieties. One, the most expensive, had a hybrid “Liege-type” lock with lockplate shaped as a bar-action gun, but the mainspring behind the hammer – so that it didn’t weaken the stock at the wrist, like the traditional back-action, and didn’t require removing metal from the action to house the locks like a bar-action. There was also a cheaper version of the bar-action gun, without engraving and with clap-on fore-end, and a cheaper yet traditional back-action gun without a top fastener. 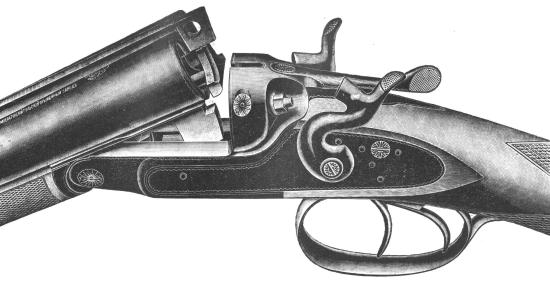 According to Igor Karilinsh’s research, Tula guns didn’t have any model names until 1918. They were devised by the new Bolshevick management, as Mr. Karklinsh states, primarily for accounting purposes. It was the Bolshevick, too, who dropped all other models and kept only the “Model B” (Rus.: Модель Б).

This is what makes any Tula double “with roosters” (i.e., made before 1917, the “roosters” refer to images of double-headed eagles stamped on the barrels) a highly desirable and collectable weapon.

4 thoughts on “The Hammer Guns of Tula”