One-two-stop, one-two-stop; as if in a Vienna waltz I go through pages of Joh. Springer’s 22nd Classic Auction catalogue, from Merkel over/unders to Art Nuveau engraving to a few British pragmatisms to possible but unlikely royal provenance, with an occasional nod to a sewing machine – click “More” and dance along! Tra-la-la-la-la! 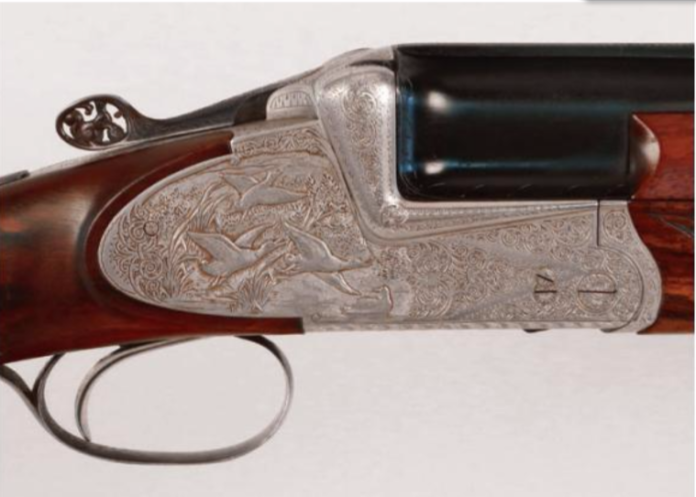 With all due respect to the mandatory matched pairs of Purdeys, the real queens of this ball are Koersten-type over/unders. I didn’t realize – although it makes perfect sense – that many Ferlach makers built their guns on this platform.

And the first of the Koerstens is Merkel 303. It has quick-detacheable side locks, like the Holland&Holland’s, but  instead of the conspicious spindle, the Gebruder Merkel made the lever flash with the surface of the lockplate. See the crescent shadow? That’s where you catch it with your nail and lift it; then the locks can be removed. An additional bonus of this scheme is, when the lid is open, you’ll be able to inspect the mainspring without removing the lock – with Blitz type locks, where the mainspring is shorter than a typical leaf spring, and consequently a bit more likely to break, it can be a useful feature.

A Merkel 303 from Joh. Springer’s auction.

There’s engraving, there’s lavish engraving, and there’s this Gastinne-Renette, from early 1900s – when the old Vienna was home to Gustav Klimt and Alfons Mucha. I have a soft spot for Art Nuveau in general and guns finished in this style in particular, even though they’re almost nonexistent – but I’ll admit this one takes it a bit too far.

I’ve seen hundreds of (mostly East German) boxlocks with screws across the head of the stock, as a repair for the lengthwise crack through the wrist – but on this pair of William Evans guns it appears to be a precaution, not a fix. I wonder if it was put in by the maker, or by a gunsmith later in the guns’ life.

A pair of William Evans boxlocks with cross-screws through the stock to prevent cracking through the wrist. From Joh.Springer’s auction.

And now for the royalty. Czar Nicolas II will feature more and more prominently in the spotlights this year, the centenial of the Russian Revolution, and the next, which marks 100 years from the execution of the royal family.

A medallion with what is supposed to be Nicolas II’s monogram, from Joh. Springer’s auction.

This medallion, with Cyrillic “NA II”, is found on the stock of one of the guns from the catalogue. The auction house makes a loose hints that this gun might be related to Czar Nicolas II, but doesn’t make a direct claim of the provenance. And for a good reason – I don’t think this gun has ever had anything to do with Russia’s last Emperor. But think about it: an old W.&C Scott&Son, a hammer gun from 1880s, that presumably started out as a double rifle, then had 80 sm Belgian proofed barrels fitted to it, and has another set of Belgian-proofed slug barrels with a Belgian maker’s mark on them – what would it be worth without a monogram? A bit above scrape metal. But the monogram, even without any documental evidence, hikes the estimate to 12,000 Euro.

One of the most interesting aspects of gun collecting is the obscure actions of the XIX century. In the quest for the perfect gun, makers of the world came up, perhaps, with every possible way of making a striker break a primer. This Thomas Bland&Son is one of those ingenious designs that didn’t quite make it through the natural selection of the British gun trade.

The lockplates hide coil mainsprings and inline moving strikers – this is, obviously, what was known as the Acme gun by Woodward. Here’s how it looks like inside:

Inside view of “The Acme Gun” by Woodward, from Stonehenge’s “Modern Sportsman’s Gun and Rifle, v. 1”

And now to the sewing machines – not that there’s actually any for sale at Springer’s, but the Sjoegren sure looks like one. 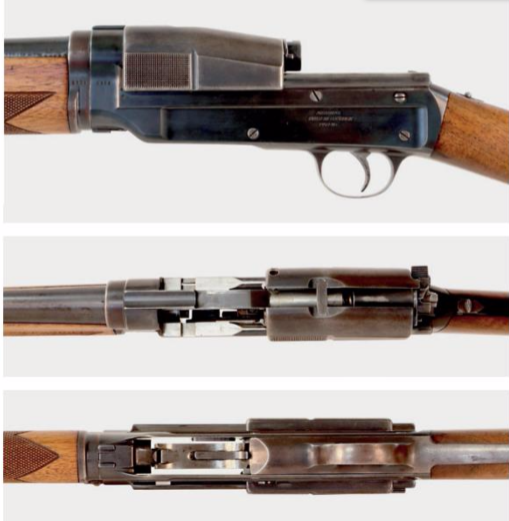 I guess I’d be pissed off shooting this thing, with this massive bolt going to and forth right in front of my face – and I also guess that’s what kept the design from gaining more popularity in the early 1900s. The principle itself is sound, as Benelli showed half a century later, and as far as I know, those who tried Sjoegrens afield say work as good as any Browning. In spite of all my wisecracks, I have a deep respect for this one of the first semi-auto designs ever, and the first inertia-operated shotgun.

This, of course, is only a fraction of the catalogue’s contents. Unfortunately, there are no Russian guns in it; only a few Baikal shotguns, Mosin rifles, Tokarev and Nagant handguns are mentioned in the “silent” auction section, which features the most affordable weapons. A TsKIB gun, or even a higher-grade gun from Izhevsk would not be out of place in the main catalogue – perhaps next time…  Meanwhile, click on to read the previous part about pistols, rifles, and combination guns.