A glimpse into the issue

It’s been two years since I’m officially working at Russian Hunting Magazine, and it feels like a long distance breaststroke swim. Gulp in some air, dive, gulp, dive, gulp, dive, only at month-long cycle. There may be a split second while the issue is at the printer’s when you can come to your senses and ask yourself “Whither art thou going?”, but mostly you’re too busy breathing.

Anyway, the topic of the August issue is how does hunting in Russia look to a person from a developed country. The Editor-in-Chief, Mikhail Krechmar, spent most of the 1990s outfitting and guiding bear, sheep and moose hunts in the North-East of Siberia, and he remembers well the crowds of international hunters that were coming in for these hunts. And then, suddenly, it was over. The official figures suggest the number of international hunters visiting Russia have decreased by 40.

So I spent the last couple of weeks trying to figure out the answer. My biggest takeaway was that the Internet questionnaires don’t always work the way we think they do. It’s common knowledge that the happy customer doesn’t want to bother with ticking the boxes and typing in the extended answer, only the dissatisfied clients leave reviews. In this case, I have a way of knowing it worked the other way round. Those who loved hunting in Russia filled in the survey form. The people who hated their Russian hunting experience ignored it. 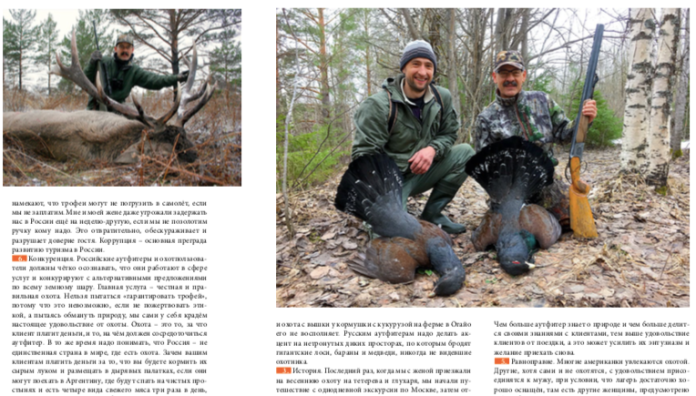 All in all, 29 pages out of the magazine’s 112 (excluding covers) were dedicated to the topic of “Foreigners in Russia”: one analytical piece from the Editor-in-Chief; one article based on an anonymous survey that I placed in hunting groups on Facebook and distributed among BookYourHunt.com‘s clients; one story by Ron Spomer describing his impressions on hunting in Russia; one story by a Greek hunter on a similar subject; one story about a recent hunt by Estonians at the Urals, written by their outfitter; a small collection of hunting anecdotes that could’ve used the famous Lermontov’s line: “It would have been extremely funny if only it weren’t so sad” as an epigraph.

I will probably post my questionnaire-based story here at some point in the future, but today I’d like to give an overview of other stuff we print in the magazine. 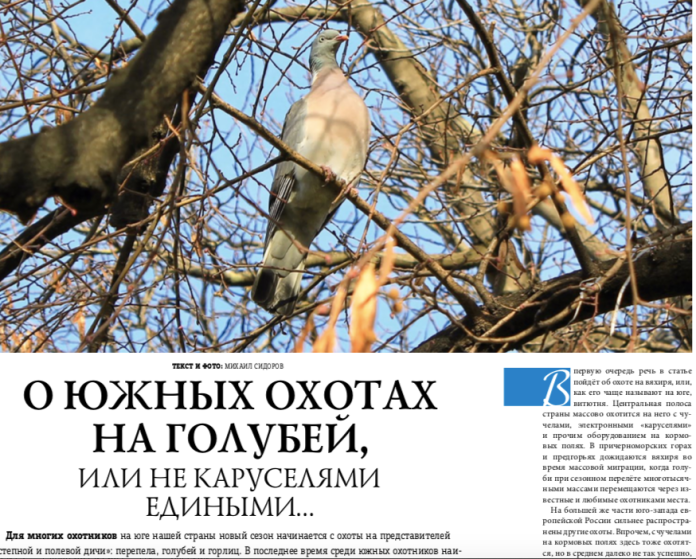 Dove and pigeon hunting in the South of Russia. We do have woodpigeons, common dove, and even the Eurasian collared dove which is considered invasive species. Interestingly, the ways of hunting differ from North to South. About the Moscow latitude, most people hunt woodpigeons a-la anglais: with decoys and blinds. In the South, as this story describes, it looks more like Texas. Figures, sort of. 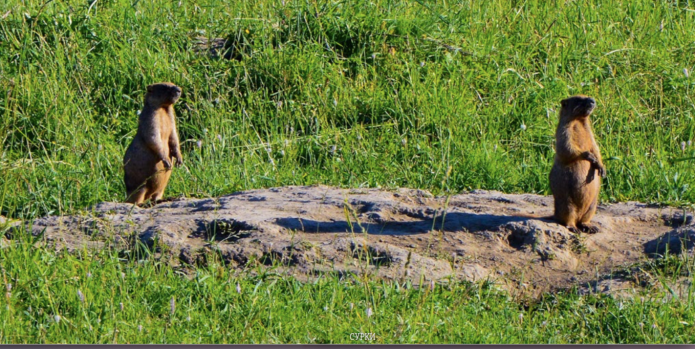 Can you hunt groundhogs with a shotgun? Groundhogs are a rifleman’s quarry – usually, that is, but in Russia you have to hunt for 5 years with a shotgun before the government trusts you with a rifle. Short answer: you can. In the canine department we run a story about hounds and hunting deer, boar, and other ungulates, by our longtime friend and a great journalist from Belarus Alexander Ocheretny. The “Hunting Abroad” department covers wildfowling on the coastal marshes of Great Britain. 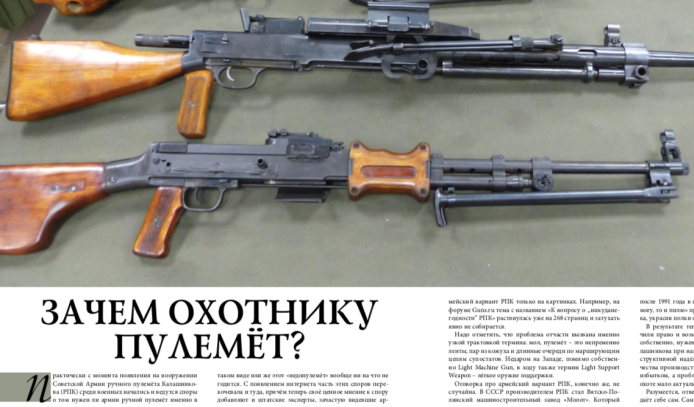 There are thee stories in the “Gun Chamber”: two aren’t very different from what you’ll read in the August issue of your fav hunting mag (the latest of Browning, and Muller chokes), the third runs on a provocative headline “Why does a hunter need a machine-gun?”, but it’s not about gun control: it’s about hunting rifles built by Molot on the Kalashnikov light machine gun platform, and how can you upgrade them at home. 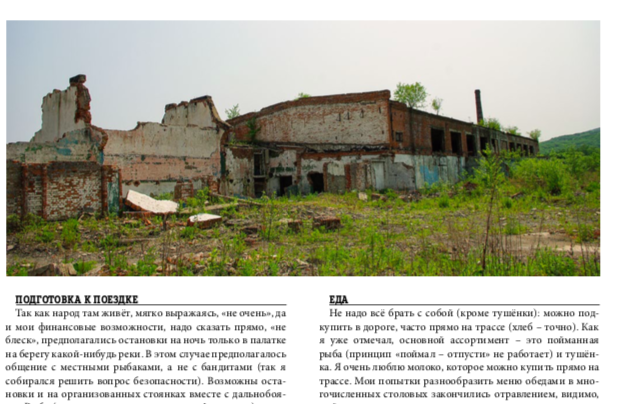 The gear department covers sleeping bags and Nikon binoculars, but these are the kind of stories for which you give credit to the magazine’s advertising department. Lovers of the cold blades get a story about a “tacticool” offering from Kislyar Supreme knives, which is called “Delta” (yup, as in “Delta Force. The name says it all). Transport, however, offers a cool story of one guy’s drive from Moscow to Vladivostok. He had to buy an old Nissan Patrol, as few other vehicles would be capable of the feat. 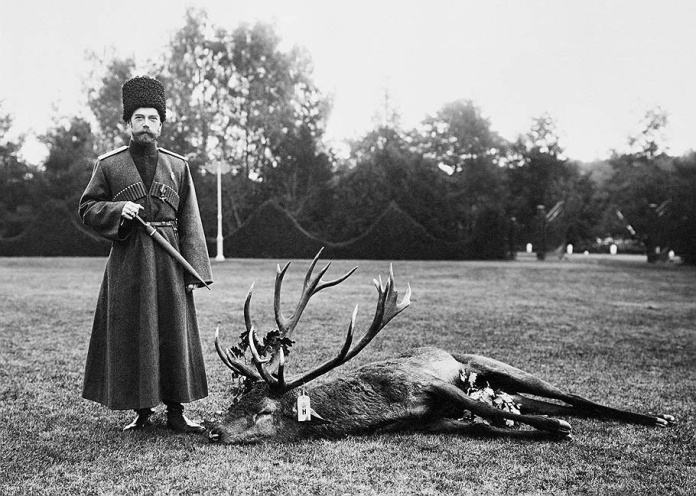 Last but not the least, there are two departments in Russian Hunting Magazine which we secretly believe to be icing on the cake: “Culture of Hunting” and “Shadows of the Past”. In the former, there’s a story about conservation and game farming in the United Arab Emirates. In the latter, a story about the Spala hunting estate in Poland, that was founded by Alexander II of Russia, used by Nicolas I and the Presidents of independent Poland, and now is in ruins.

My old “British Column” was dropped two years ago, and replaced by another regular column, “Soldier and Hunter”, by Andrey Ulanov. Usually, he writes very interesting pieces on application of military arms for hunting, and hunting experience in the military. This month he covers competition between Tula and Liege hunting guns before 1917 (but, to be honest, it’s not his best job).

Throw in the news, and that’s about what you get for your ruble’s worth (the magazine’s MSRP is 240 rubles – about $3.80 at today’s rates). You can read most of these stories for free, if you wait until September, when we’ll post them on the Russian Hunting Portal. My own feelings about this issue are typically mixed. I’m usually proud of what we do, but seldom satisfied. There’s always the impression that we could’ve done it so much better. But, then again, I often post selected stories from Russian Hunting Magazines, but always wanted to give a glimpse into what the whole issue looks like, and here you go.